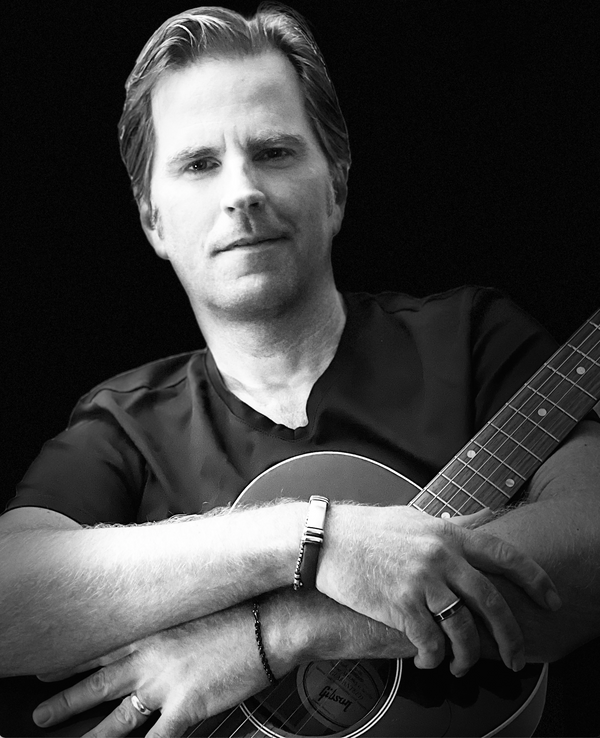 John Lewitt is a singer, multi-instrumentalist, and songwriter based in Toronto, Canada. He writes and records music which weaves its way through multiple genres; Country, Folk Rock, and Americana.

On May 13th, 2022 he will release his 7th album, the Americana 'The Beaten Path'.  Leaning heavily into the Americana genre and spanning the width of what that means - from the early beginnings of The Band to current artists like Jason Isbell, he hopes that you will find a song here that you can fall in love with.

John licenses his music to Film & TV and other similar opportunities.  The CBS TV show 'The Young & The Restless'  has used many of his songs multiple times over the past few years (including two recent usages of 'For All Time' from the upcoming 'The Beaten Path' album).  Last year one of his songs was licensed by a Fortune 500 for a social media campaign and that same tune was recently licensed for use in a VR Fitness app!

He is proud to have had the following songs played frequently on Canadian radio, ranging from CBC Radio’s Afternoon Drive & Fresh Air shows to regional stations; “Go On”, “The Reason Why”, “Fallback (Stage Fright)”, "Perfect Storm", "All Good Things" and “Figure It Out”.

Over his career he has played in a variety of bands and at a variety of venues.  Some of his favourite appearances include playing at Roy Thompson Hall (Toronto), the Horseshoe Tavern (Toronto), C'est What (Toronto), the French Quarter Festival (New Orleans), and Park West (Chicago).

The Divide and Conquer website had this to say in summary of his last album;

"Stories I Tell the Snowman was a walk down memory lane for me, as anyone who grew up in the ‘70s and ‘80s can relate to the references mentioned in the song’s lyrics. Productions wise, Lewitt did a fantastic job – a cohesive album all around."

Recording Magazine has featured his songs several times over the past few years and this is a sampling of what Marty Peters has had to say about his work: “Catchy, catchy tune….A fine summer soundtrack… John is quite obviously a talented musician and engineer; the good performances and tones he achieved would have been impossible if he were not.”

'FINDING MY VOICE' BY JOHN LEWITT

As a teenager in the eighties I dreamed about being the next Bruce Springsteen or Bryan Adams.  I would enthusiastically sing along to all of their songs, knowing that one day I would be just like them.  Unfortunately for those within earshot, I was completely tone deaf, which for me put a big dent in my dreams of becoming a world famous rock and roll star.  Realizing this limitation, I looked at other ways of achieving this realistic goal.  I had taken piano lessons when I was 5 years old and stopped taking them a couple years later.  My teacher had wanted me to play recitals but I didn’t appreciate the constant awarding of participation ribbons, so I quit.   However, years later at the ripe old age of 13, I still had this scant knowledge of how to play the piano so I decided this would be my gateway to fame and fortune.  If truth be told, I was trying to impress a girl, which I now know is a rock and roll cliche.  I went out and bought the easy sheet music to ‘Purple Rain’ and proceeded to practice playing the song ad nauseam.   Apparently, if you play something 500 times in a row you can get quite good at it.

Over the course my high school years, I got better and better at the piano and even played Roy Thompson Hall a couple of times.  But deep down, I still wanted to sing.  Unfortunately, my voice did not improve as puberty set in.  I knew the notes I needed to hit, I just couldn’t get there.

I went off to McGill University in 1990 and the one thing I couldn’t take with me was my piano, which posed a problem as I played it religiously 2 to 3 hours a day. It was then that I decided I should learn how to play a more portable instrument, so I went out and bought myself an acoustic guitar.  I had noodled around on one that my uncle had lent me years before, but I didn’t really know what I was doing.  I practised lots and got good enough that in the summer of my third year of university I recorded an album with a friend of mine who played the drums.  And for the first time in my life, I sang with the intention of people hearing me do it!  This was a big step for me and I’m proud to say that I didn’t stumble.  However, neither did I soar.  There was something about learning how to play the guitar that changed my musical ear - when I played it I was able to hold a melody without having anyone leave the room.  But I faced a new challenge.  Just being able to sing in key does not make you a rock and roll star.  Well, at least it didn’t back then.  I had to learn how to actually sing in a way that was honest, in a way that would connect me to my audience.  I needed to find my voice.

At this point in the story, life got in the way.  I got a job.  I got married.  I had kids.  I didn’t have a lot of time to focus on singing or making music.  It suddenly became my weekend morning hobby and it was destined to stay a hobby.  Each year I’d put together a homemade CD of the 12 songs I had recently written and recorded and I gave them out to friends and family.  Looking back I’m embarrassed at what I created and shared with them.  You see, I’d learned to sing in key and I’d learned to start phrasing things in interesting ways, however, it hadn’t occurred to me to write songs in a key that was appropriate to my voice.  I was trying to hit notes that I had no business of ever approaching.

Fast forward to this decade and I’d reached a point in my life that allowed me to focus all of my time on music and lucky for me the world of high end music creation had moved into our basements.  An artist no longer had to pay thousands of dollars to rent studio time to produce a high quality demo that would ultimately be rejected by every music company out there.  We had moved into an age where it was possible to spend those thousands of dollars building a home studio that would get you the exact same result!  But this is the part of the story where my perseverance started paying off.  You see, after all of these years I had still not given up my dream of becoming a rock and roll star.  I had started writing songs that I could sing and sing well.  But then I had to learn how to be a mix engineer.  You see, I could record all these great parts, but putting them all together to make something special is yet another art I had to learn, so I got to it and learned how to do so.

I now had the whole package and I was ready to share it with the world.  I was ready to be discovered!  But guess what, no one cared and work still needed to be done.  I produced a beautiful looking CD and gave it to anyone who would take it from me.   We had reached a point in time where no one wanted to pay for music anymore, so my plan was to hook them, for free, with my musical brilliance.  And guess what?  The strangest thing started happening.  People started telling me how much they loved my voice, I heard things like “Oh my God, I didn’t know you could sing like that!”  I thought they were being kind, and in the back of my mind I was thinking perhaps they were under the influence of something illicit.  Then one Sunday morning, I started getting a bunch of emails.  “John, I just heard your song on CBC radio.”  I’ve got to tell you, that was one of the greatest things to happen to me.  The validation of someone I didn’t know, who actually did this for a living, playing my music for others was life changing.

Since then I’ve had a bunch of songs played on the radio.  I’ve had my music played on TV.  Companies have licensed my songs to play in their stores to entice people to buy things.  I have people streaming my music daily on Spotify.  And I’ve had other artists tell me they wish that they could sing like me!  All of this still boggles the 13 year old version of me who wanted to be a rock and roll star.  While it would’ve been cool for that to have happened I’ve realized that that wasn’t my actual dream.  To have the ability to sing, either for just myself or others - I think that was my real dream all along.  I just had to be able to do so in order to realize that fact.